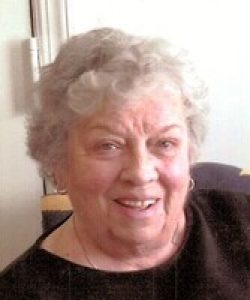 Section Garden of Heritage I Lot Number: 329Grave Number: B#2

Ann Marie was born in Worcester, the daughter of Thomas and Albina (Giroux) Hayes. Raised in Worcester, she married Anthony Pignataro and they settled in Shrewsbury to raise their family and continued to be a part of the community until her passing. Ann Marie worked for many years for the Commonwealth of Massachusetts before retiring.

The “love of her life” Tony passed away in 2015 after 57 years of marriage. She is survived by her four devoted sons, Robert, James and his wife, Mary and Michael all of Shrewsbury, Anthony Pignataro and his wife Amybeth of Queens, NY; three grandchildren; Anne Marie and her fiancé Cj Martinez, Kayla stationed overseas in the United States Air Force, and Arlo; as well as extended family members. In addition to her parents and husband, a brother Robert predeceased her.

Ann Marie was a dedicated mother and grandmother. She checked in with her family often, sending notes, comics, hand-made cards, and messages with funny memories. Having her family around her, sharing stories, and laughing, were her cherished moments. She was an artist in every sense, creating stained glass, acrylic and watercolor paintings, and many other crafts that she gifted to friends and family.

She volunteered her time and energy. She and Tony were active members of the Italian American Victory Club, where they organized many events including its Monday night Bocce League. Ann was a member of St Anne’s Church, a longtime Shrewsbury election poll worker and a member of the Shrewsbury Garden Club, where she notably used her talents beautifying the Jordan Pond area. Ann Marie also had a circle of friends for over 50 years who notably called themselves the Girls Club and met at least once a month to be with each other.

Ann Marie’s memorial service will be held Saturday, December 5th at 1 pm in the MERCADANTE FUNERAL HOME & CHAPEL, 370 Plantation St. Burial will be private. A period of calling hours will be held from 11 am to 1pm in the funeral home. COVID restrictions, Masks and social distancing will be required. In lieu of flowers, memorial contributions in her name can be made to St Anne’s Church Human Services, 130 Boston Turnpike Rd. or the Shrewsbury Garden Club, P.O. Box 354, Shrewsbury, Massachusetts, 01545