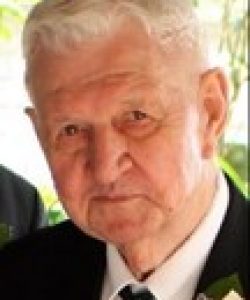 Place of Service Our Lady of Czestochowa

Alexander A. Drisco, 97, of Worcester, died on Tuesday, September 3, 2019. His wife of sixty-six years, Lucy (Kasprzak) Drisco died in 2012. He is survived by his son, Richard Drisco and his wife Donna of Charlton; grandchildren, Jeffrey Drisco, Justin Drisco, Jason Drisco and Steven Glenboski; six great grandchildren; many nieces and nephews. He is predeceased by a daughter Mary Lou Glenboski; a sister, Esther Drisco; brothers, Leo, Clifford, William and Harold Drisco. He was born in Clinton a son of the late Alexander and Mary Louise (Lemieux) Drisco.

Mr. Drisco retired as a security guard for Apollo Security after working many years at Thom McAn Company and previously at US Envelope Company. He was a proud veteran, serving with the US Navy during World War II. He was a member of the American Legion, Vernon Hill Post 435. He was a humble and spiritual man who was gratified with his faith and his family. Alexander was a former member of Our Lady of Czestochowa Church. He enjoyed his Polish heritage, enjoying polish food and music at many festivals with his wife.