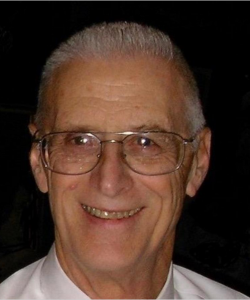 Section Garden of Heritage I Lot Number: 70Grave Number: B#3

Alan E. Stanhope, 89, died peacefully, surrounded by his loving family, on Saturday, April 17, 2021. He was born in Worcester, the son of the late George E. and Hazel (Richardson) Stanhope and had lived in Paxton for 53 years.

Alan wore many hats in his life; mechanical engineer, marksman, handy-man, family man, and friend. He was an avid outdoorsman who enjoyed hunting, fishing, hiking, trail biking, canoeing, snowshoeing, and cross-country skiing. As a Boy Scout leader he shared his love of hiking and his skills as an outdoorsman by taking his troop to climb Mount Washington on more than one occasion.

He graduated from Holden High School and went on to earn an Associate’s Degree in Mechanical Engineering from Worcester Junior College. With a love of firearms and a mind for engineering, Alan began his career at Harrington and Richardson Firearms where he was a toolmaker for 6 years. He later worked for George Meyer Co. for 22 years and most recently at Morgan Construction Co. in Worcester until he retired in 1990. He married his beloved first wife, Nancy (Lawrence) Stanhope in 1952 and shared 61 years of marriage before her passing in 2013. Alan found love once again and married his beloved wife, Jane Pease in 2018.

Alan was well known for his skills as a marksman and a hunter and had competed in the Worcester Pistol League for many years. Later he enjoyed competing in Cowboy matches and was known by the name Roadrunner. He was a member of the Barre Sportsman’s Club, Nimrod League of Holden and the Paxton Men’s Club among others. He volunteered his time and his many skills for several organizations, including Meals on Wheels, the Rail Trail and the Wachusett Food Pantry. He helped to build the gates for Morgan Park on Indian Lake. He was quick to lend a helping hand to those he knew who had a project or a job that needed to be done. Above all he cherished the time he spent with his family and was proud to be a great grandfather.

Alan will be lovingly missed and remembered by his beloved wife, Jane Pease of Oakham; his son, Adam Stanhope and his husband, Dale Gonyea of Sturbridge; his daughter, Bethanne Persons and her husband, Michael of Holden; his daughter-in-law, Jane Stanhope Ring and her husband Gary of Leicester; his sisters, Doris Field of Sutton and Rhoda Yucavitch of Northfield; his step daughters, Laura Pease and Leona Pease; his grandchildren, Janna Merk, Daniel Stanhope, Emily Damon, Timothy Palmerino; his great grandchildren, Julia, Hailey, Ava, Mikaela, Drew, Jake and Mac; and several nieces and nephews. Alan was also predeceased by his son, Andrew Stanhope; and his sister, Phyllis Laws.

Relatives and friends are invited to attend a Memorial Service honoring and celebrating Alan’s life at 2 p.m. on Sunday, May 2, 2021 at the First Congregational Church, 1180 Main Street, Holden, MA. Burial will be private. In lieu of flowers donations may be made to the Rocky Mountain Elk Foundation. Arrangements are under the care of Miles Funeral Home, 1158 Main St., Holden.