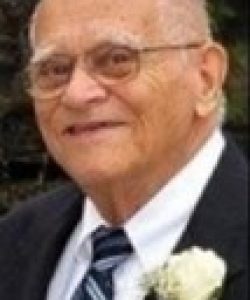 Albert R. Menard, 91, of Worcester passed away peacefully in his home on Saturday, February 1st surrounded by his family.

Albert was born in Spencer, MA on December 3, 1928 to Oscar and Clara (Gendreau) Menard. He was predeceased by his beloved wife of 58 years, Emilia (Galli), an infant daughter Mary, a brother Oscar Jr., and three sisters Rita Allen, Claire Menard, and Louise Dion.

He is survived by his son Michael and his wife Joanne of Holden, and three daughters Diane Phaneuf and her husband Michael of Holden, Jeanne Martino and her husband Gary of Granby, CT, and Maria Pitney and her husband Patrick of Shrewsbury; twelve grandchildren, Maxwell and Camila Menard, Rachael (Phaneuf) Rossi, Marissa and Alicia Phaneuf, Benjamin and Travis Martino, Sarah (Martino) Kelley, Rebecca (Martino) Houle, Victoria, Andrew, and Thomas Pitney; along with ten great-grandchildren and many nieces and nephews.

Albert served 25 months in the US Navy with pride. He was stationed in San Diego and served aboard the USNS R.0.Beaudoin in Guam. Upon returning home, he graduated from the former Worcester Boys Trade. He went on to work for the next 41 years as a design engineer for the Heald Machine Company where he received a patent in 1962 as a co-designer of an innovative machine tool feed mechanism.

What Al valued most was faith and family. He was an active member of the Immaculate Conception Church for over 56 years. He was happiest attending family gatherings and cherished the sound of laughter. He could always be found at his grandchildren’s events and was their biggest fan. Albert was also an avid Red Sox and Patriots supporter (and sometimes critic). He loved cooking, and “puttering around” his yard in the spring and summer. He was known for “fixing” almost anything around the house. In his younger years he enjoyed dancing, skating, and long walks.

The family would like to express their sincere gratitude to Michael Galica, MD, Theo Meyer, MD and Maggie Cabral, NP of UMass Memorial Medical Center along with the nurses and staff of the Jewish Healthcare Center Homecare and Hospice programs for their extraordinary care and compassion. In lieu of flowers, memorial donations in his name can be made to: Jewish Healthcare Center, 646 Salisbury Street, Worcester, MA 01609.

Services will be held on Thursday, February 6th from Athy Memorial Home, 111 Lancaster Street, Worcester, with a Mass of Christian burial at 11:00 am in Immaculate Conception Church, 353 Grove Street, Worcester. Burial will follow at Worcester County Memorial Park, Paxton. Relatives and friends are invited to visit with the family from 9:00 to 10:30 am in the funeral home prior to Mass.